Childs love pets and wants to be pet owners – any parent might agree. Guinea Pigs are often bought for childs. Cavys are cute, peaceful and does not waste precious time. So are Guinea Pigs the best children’s pet? For parents taking a decision in which animal should enrich your family is quite hard. What about Guinea Pigs for your child? Lets have a look!

Rodents like rabbits or Guinea Pigs are often particular a gift for childs – and in many cases this will be the beginning of a torture for the pig.

Common false statements you have to move away from

You can often hear these or similar sentences from pet shops or read it in some magazine as gap filler article – but they are all wrong.

Guinea Pigs and kids as best buddies are possible

Of course Guinea Pigs can be perfect pets for your child, but you have to face that you as parent have to keep them also and teach your children the proper way Guinea Pigs should be kept. Your child should only help at the beginning if you clean out the cage, cut some vegetables to feed, cut the claws and anything else what belongs to keeping cavies. In this way kids can be taught howto assume responsibility and build up their self-confidence further.

There is another point we’ll need to talk about: Diseases. You need to have an extensive eye on your cavies every day. They are quite robust and seldom become sick. But if they are sick you have to notice it very fast because it can be too late soon. They won’t tell you that something is wrong. Some innocent-looking diseases like diarrhea or flatulence can be deadly already if you spot them too late.

Do never buy Guinea Pigs only because your kids want it. At least one parent have to be interested too.

Guinea Pigs are no cuddly animals or toys! 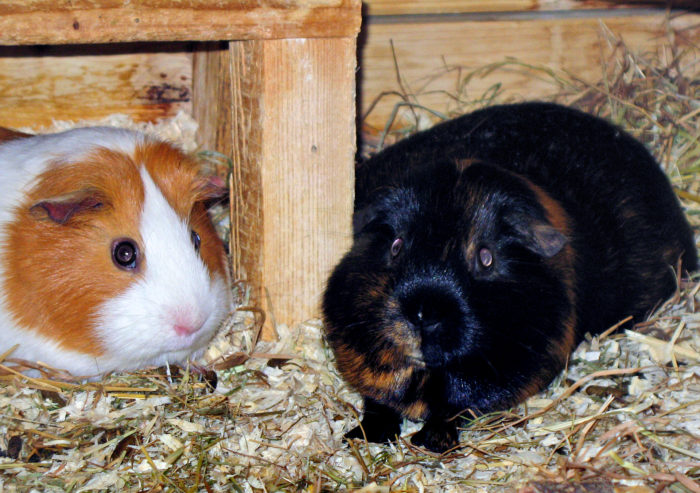 OK, we’re not blind. If we take look at animal adivsors or google Guinea Pigs with children we found thousands upon thousands of results kids are cuddling, kissing or stroking cavies. But it is a shame. Please make sure that this is a totally human decision. A Guinea Pigs does not search for presence like cats or dogs – they even won’t cuddle each others if everything is in tune. Understand that Guinea Pigs make distance to their conspecifics. Explain your child that Guinea Pigs are individuals that won’t cuddle, won’t be kissed and won’t be holded. These are ALL hunting-like interactions and serious stressors. If a cavy squeaks while you are entering the room – and it will be – be clear about that it will do it for food and nothing else.

Guinea Pigs should never be bought only if your child wants it. At least one parent needs interest in that animals too!

This article is tagged with:
Child, Toy